Santo Tomas was created in 1764 through a Spanish Royal Decree. Spanish authorities named the town of Santo Tomas in honor of their first patron saint, Santo Tomas de Aquinas. The town was formerly part of Mangaldan, Pangasinan before it became independent in 1764.

The first appointed gobernadorcillo was Don Lorenzo delos Reyes, a prominent native of the place. The Spanish authorities were, however, displeased of his administration, thus, it was merged with the municipality of Agoo. After almost 21 years of being merged, the dynamic leadership of Don Domingo Carpio, also a native of this town, courageously initiated the secession movement of Santo Tomas from Agoo. His sincerity and dedication won the overwhelming support of his townmates that forced the Spanish authorities to surrender the town in 1785, regaining her independence.

Under the administration of Don Domingo Carpio, Santo Tomas marked its marvelous growth and existence as independent municipality. Don Carpio was appointed Gobernadorcillo because of his excellent performance.

In 1843, the title gobernadorcillo which is given to a head of a town by Spanish authorities was changed to “Captain.” Don Antonio Bernal was appointed the first Capitan in 1889 when the Spanish Colonization came to an end. The last captain was Don Sixto Zandueta.

The American regime began to rule over the country in 1899. The local administration under American authorities asserted the designation of Municipal Presidentes in place of the Capitanes. Don Bruno Pacho was the first “Presidente Municipal” of Santo Tomas. He served until 1901. Several successors were appointed and the last was Don Eusebio Tabora.

When World War II broke out in 1941, the Japanese soldiers landed along the shores of Santo Tomas three days before Christmas. This temporarily relieved the town from American rule.

The Japanese authorities started their operation by organizing the municipal government. Municipal mayors were appointed as heads of the town. Don Moises Villanueva, the first municipal mayor was appointed in 1942. Four municipal mayors served during the Japanese Occupation. The last was Don Venacio Paculan whose term ended shortly on January 15, 1945 after the Americans landed along the Lingayen Gulf on January 14, 1945 to start the liberation of Luzon.

Two mountains are identified in this town. Mount Carmen is found in Patac while Mount Kimmallogong (hat-shaped mountain), is found between Casilagan and Bail.
There are two existing rivers in this town namely the Cupang and Manaclew Rivers.

Barangays Pongpong, Bail, Casilagan and Ambitacay are all situated between two hills. On the other hand, a plateau is located in barangay Patac where a Grotto of the Virgin Mary is built.

Santo Tomas has long shorelines covering eleven barangays. Aside from these long shorelines, there is also a lake at the western part of Tococ and Balaoc called the Capeng-peng Lake. At the west of Poblacion, the Raois Lagoon is found. Both bodies of water are excellent fishing grounds for the residents of Santo Tomas and it is well known for its milkfish and oyster that are incomparable to other towns producing the same.

Fishing is the major occupation of people along the coastal barangays. As a result, Santo Tomas is famous for the abundance of dried and smoked fish products which are commonly sold along the national roads. Barangay Damortis is the busiest dried fish selling area of the town. It is also the landing port of vessels engaged in fishing. 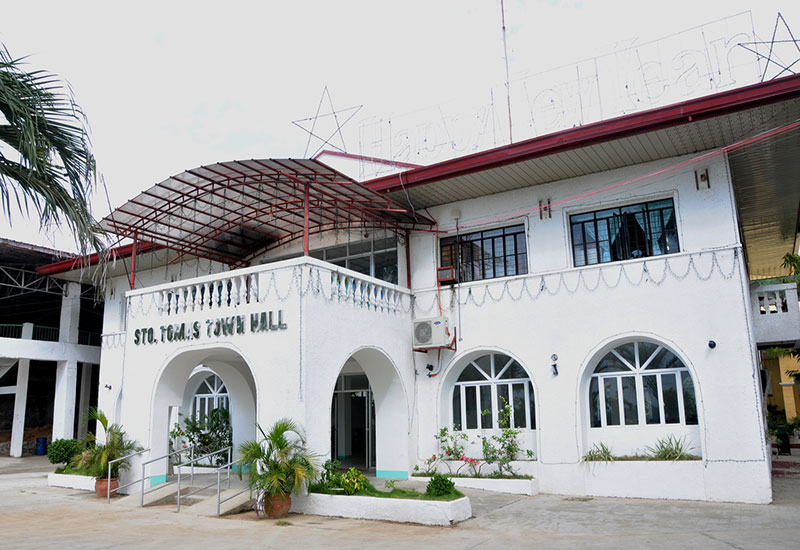 Unlike other coastal towns in the province which are lined with beach resorts, Sto. Tomas utilizes its coastal area primarily for fishing. Known for their fishing skills, the men would give their catch to their wives who are expert in dried fish processing which explains the long line of daing stalls along the national highway. It also affirms their deep faith to Senora Virgen del Mar Cautiva also known as Virgen of the Sea, the patron saint of fishermen. Her Feast Day is celebrated every 26th of April. Other notable events include the feast of the Holy Guardian Angel which falls on the 2nd of October; Daing Festival held every April 20; and annual town fiesta every April 24 and 25.

Located south of Agoo and North of Rosario, it is approximately 230 kilometers or around four-hour drive away from Manila. Tricycles are located at the welcome arch near the national highway which serve as the main form of public transportation within the municipality and are available anytime of the day.

When in Sto. Tomas, a visit to the Municipal Hall located on top of a hill never fails to amaze guests with its breath-taking view of the town’s coastal area. Visitors are also welcome to get a taste of local rice cakes which includes Bibingka, Nilatekan, and Patopat.