The town of San Gabriel is located along the eastern most part of the province of La Union. It was formerly called sitio “Baka-Burnotan”, derived from the game of the old folks which means “Binnornutan” or Tug of War. Sitio Baka-Burnotan was the place where people in the nearby sitios gathered daily to graze their cattle to play “Binnornutan.” The games were played among the Christians and the pagan settlers, who belong to the Kankanaey tribe. During the later years, the name “Baka-Burnotan” was shortened to Burnotan.

Sitio Burnotan became the ideal place to settle because of the wide plain along the river and fertile soil. Intermarriages among Christians and pagan settlers greatly contributed to the increase of the population. In April 19, 1897, the Roman Catholic Church, though the late Fr. Redondo, indoctrinated the pagan settlers with Christian teachings. He established a church and introduced the image of Saint Gabriel to be their patron saint. As a result, many of the pagan inhabitants embraced Christianity and many of them were baptized. The people later decided to change the name of the place to San Gabriel in honor of their patron saint.

San Gabriel was made into a township in 1906 under the sub-province Amburayan, Mountain Province with Don Pablo Waggay as the first “presidente”.

In 1947, San Gabriel was converted into a regular municipality by virtue of Executive Order No. 72 issued by President Manuel Roxas through the sponsorship of the former Speaker Pro-Tempore Francisco Ortega at the House of Representatives.

Another interesting event that happened in this municipality was the introduction of “Sagrada Familia” (Holy Familia), a subsidiary of the Aglipayan Church. Sagrada Familia was founded by Lorenzo Lok-king, a native of Sabangan, Mountain Province. He first introduced this when he settled in barrio Lipay. Lok-king’s amiable way of virtous leadership gained favorable approval and good reputation among the people. For this reason, many were attracted to settle in this barrio, most of them came from Mountain Province and other parts of the Cordillera. Due to old age, he was not able to continue his mission so he appointed Don Pedro Daoa, Sr. to be his successor.

Due to the influx of migrant settlers from various provinces, the leader of Sagrada grouped these settlers according to their respective tribes and distributed them to different villages within his jurisdiction. The immigrants from Sagrada occupied Lon-Oy; the Bauko-Bagnen immigrants settled in Lipay Este; Itneg immigrants occupied Lipay Norte while the Bago tribes occupied Lipay proper and Balbalayang. The Kankanaey tribe from western Bontoc is now the dominant population of San Gabriel.

The people of San Gabriel during the early days were engaged mainly in highland farming as their means of livelihood. They produced rice, corn, sweet potatoes and other root crops. As years passed by, the crop production decreased due to the massive soil erosion in the uplands. Nevertheless, the inhabitants decided to improve their farming techniques and they started making terraces. The perseverance of the people in constructing rice terraces and irrigation system along the hills and mountains of San Gabriel further increased their productivity. Tiger grass and banana are also produced abundantly in this town. 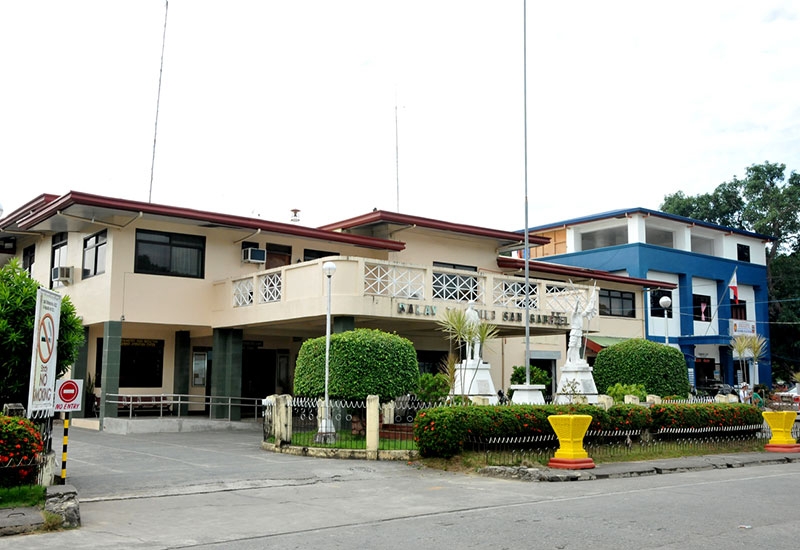 With the highest percentage of agricultural land in La Union’s District I, San Gabriel is the prime producer of highland vegetables in the province. From this municipality, one can have a taste of fresh upland vegetables such as cucumber, cabbage and carrots as well as fruits such as lanzones and rambutan. The Municipality also has its native delicacy called Imbagkal and Tapey (Rice Wine).

San Gabriel can be reached via provincial roads from Bacnotan and San Juan or connecting roads from Santol and Bagulin.

The town is famous for its Tangadan Falls which attracts thousands of tourists each year. Visitors may also come to Liang Digo and Liang Labaan Natural Caves with its wooden coffins of unknown origin.

The Kankanaeys formerly called the town Baka-Burnotan. This is after the game likened to tug-of-war that local folks and people from nearby sitios often played. With the introduction of Christianity, the native populace embraced St. Gabriel the Archangel as their patron saint, thereby christening the municipality after his name. San Gabriel holds its patronal fiesta every March 25 and town fiesta every April 19-21.