Bauang was established as a settlement in 1590 with fray Agustin Mino as its first minister. As part of the province of Pangasinan, it was officially recognized as a town in 1765 with Don Francisco delos Reyes as its first gobernadorcillo. When La Union was created in 1850, Bauang was one of the twelve towns that formed the province.

Like other towns in the province, Bauang also had its share in the devastating invasions of Moro pirates (“tirong” in the local dialect). In the stillness of the night, the Moro pirates would swoop upon the town without any warning, killing people and kidnapping women and children only to be sold into slavery. They stole cattle, looted the town, and broke into the church and robbed it of its silver and gold.

These invasions gave rise to the construction of watchtowers, locally known as baluarte, along the coast and at the mouth of the Bauang River. These watchtowers served as a fortress against the invading pirates. It was also utilized as a refuge for the inhabitants who had no time to flee to the hills whenever the pirates were sighted. However, nothing now remains of the watchtower except the traces of its foundation.

Daring exploits of the people’s forefathers, their heroism, dedication, love and commitment to the ideals of freedom in the 1900s were handed down from generation to generation. During the latter part of 1890, Bauang residents succeeded in wrestling the town from the tyrannical administration of the Spaniards after fierce and bloody encounters between the “cazadores” (Spanish soldiers) and the “revolucionaros” (Filipinos). The revolucionaros were led separately by Remigio Patacsil and Mauro Ortiz.

During the Japanese occupation, many unknown and unsung sons of Baunag fought gallantly and spilled their precious blood on the beaches of the town, in Lingayen Gulf, Bataan, and Corregidor in defense of freedom. Majority of the youth joined the underground movement. They enlisted in the various regiments of the United States Armed Forces in the Philippines, Northern Luzon (USAFIP-NL) without any promise of reward or remuneration. Among the many who were executed by the Japanese were Manuel Arguilla, a poet and journalist and Major Alberto O. Fenit of the United State Armed Forces in the Far East (USAFFE). They met their death at the dungeons of Fort Santiago.

The martyrdom and patriotism of Mayor Ambrosio Rimando, elected mayor of Bauang before the outbreak of the war, could be told and retold. He chose not to reveal the whereabouts of his townspeople who were executed in his presence before he himself was beheaded.

Many continued the fight with gallantry and valor in the mountains. Bessang Pass and other battlefields until the country was liberated from the Japanese oppressors. Today, there stands at the town plaza a monument dedicated in honor of the fighting soldiers.

In the early 70’s Bauang earned the appellation as the “Beach Capital of the Philippines” because of the calm waters, fine sand and languidly swaying coconut trees along the shorelines of Baccuit Sur to Pagdalagan Sur. A newly discovered “Research Reef” is a favorite dive spot among local and foreign scuba divers.

Bauang is also famous for its delicious grapes and guapples grown in barangays Payocpoc, Santiago, Bagbag and Urayong. The grape industry is an additional income for farmers among the residents in these barangays until imported varieties came in. 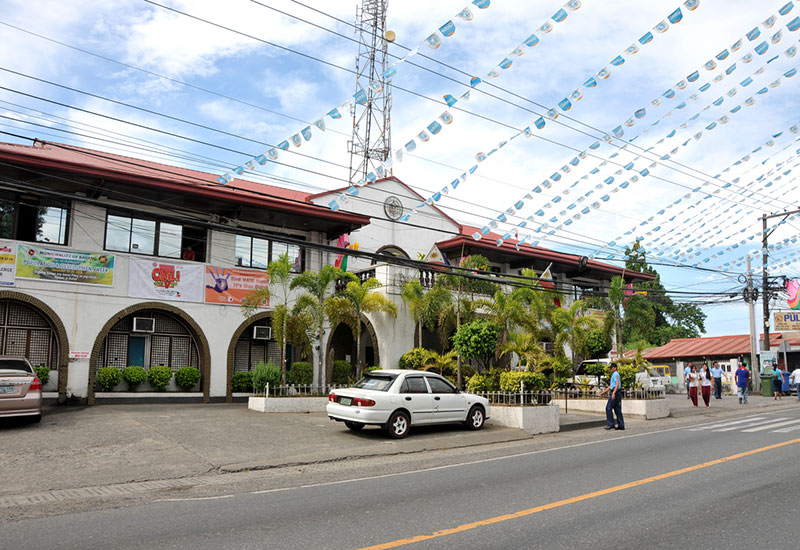 Established as a settlement in 1590, Bauang was recognized as a town in 1765 as part of Pangasinan. When La Union was created in 1850, Bauang was one of the original 12 towns that formed the province. This coastal municipality is about 10 kilometers south of San Fernando City, 50 kilometers west of Baguio City, and 250 kilometers north of Metro Manila. It is bounded on the north by the City of San Fernando, on the East by Naguilian, on the south by Caba, and on the west by South China Sea. Bauang also earned the appellation as “Beach Capital of the Philippines” during the 70’s for its pristine beaches and is still a most sought-after swimming area as shown by the continuous influx of tourists and establishments of new resorts.

Bauang beach is accessible to any form of land transportation. Its calm waters, fine sand, and languidly swaying coconut trees along the shoreline from Baccuit Sur to Pagdalagan Sur make it perfect for jet skiing, scuba diving and swimming. Various shell crafts peddled by locals at the beach area and at various shops along the highway are also available for souvenirs.

After a splash adventure on the beach, tourists can have a guapple and grapes picking adventure at Barangay Urayong. Famous for its large, thick and crispy with a tangy taste, other Guapple products include pies, jams, candies and grapes. To complete the Bauang experience, the last stop would be a solemn visit at the Grotto of Our Lady of Lourdes in Brgy. Disso-or.

Bauang celebrates its Parochial Fiesta on April 26 in honor of St. Peter and St. Paul and the Panagkakararua Festival every October 31 of the year.