Santol, a Balaoan northeastern Rancheria, became a township in 1908 under the sub-province Amburayan, Mountain Province. An Igorot named Lakay Camilot was its first municipal president.

In 1920, a new province out of the old Lepanto-Amburayan sub-province was planned to showcase the socio-cultural integration amongst lowlanders, mountaineers and the Bagos. Three towns (San Gabriel, Sudipen and Santol) were proposed for the planned province to be named Harrison, a former American Governor-General who championed filipinization and integration.

However, protest resolutions were filed by the leaders of these municipalities unanimously objecting to their inclusion because of historical, economic, cultural and geographical reasons. As a result, the proposal did not push through.

In 1922, Mountain Province relinquished Santol which became a municipal district of La Union. Santol was elevated into a regular municipality status in 1949 by virtue of Executive Order No. 214 issued by President Elpidio Quirino.

The town of Santol is considered a safe harbor for there had been no distinct destruction of lives or properties during the historic events regarding wars and calamities. Such was true during the Spanish regime and Japanese occupation. Evidence of this is that Barrio Mangan was set aside as the place of the military emergency hospital. It was also here where the center of distribution of food supplies for army personnel was located. Barrio Banbanaba was the site of message center which is directly in touch with all the barrios of Balaoan, Santol, San Gabriel and Sudipen.

Santol Central and Cadanglaan served as the grounds for training volunteers during the days nearing the landing of the Liberation Forces while Sammauting was the hiding place for the guerillas.

There are two accounts as to how Santol derived its name. the first version states that the place was once a favorite hunting ground for people interested in sculpture of religious images. In one of their hunts for material sculpture, they saw a huge tree called Santol. The size of the tree was so remarkable that several images were carved out from a single trunk, thus made it their main material in wood carving.

The second version states that during the Spanish occupation, soldiers passed by the area, but the women did not understand Spanish and presumed the soldiers were asking for the name of the fruits they were carrying. One of the women answered – “Santol, Apo.”. the soldiers also did not understand the dialect and all they remembered was the word Santol, hence, the name of the place. 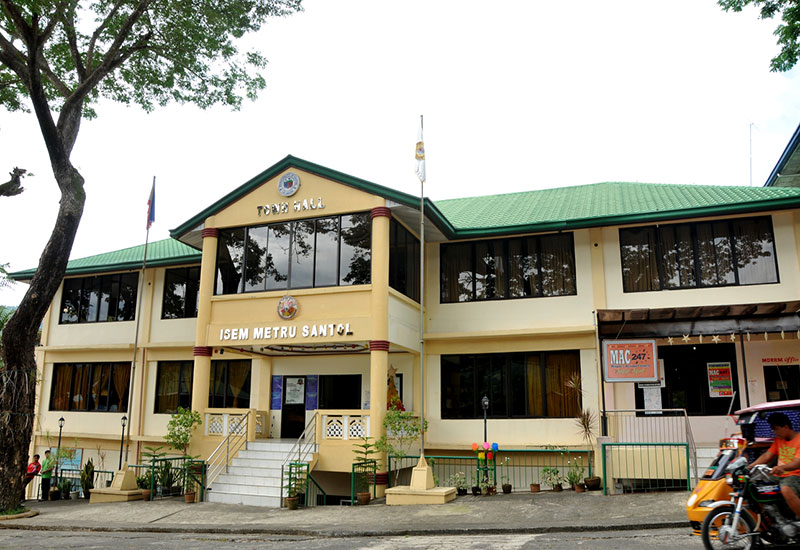 Located in the eastern mountainous area of La Union is the Municipality of Santol. It can be accessed from Balaoan through a smoothly ascending and meandering road that is ideal for biking and motorcycling enthusiasts, while its verdant and unspoiled surroundings will be a treat for nature-lovers.

While in Santol, visitors can stop by the Prayer Mountain for spiritual nourishment.

Santol is known for its Balay-Anito Waterfalls which is said to be a dwelling place of spirits with is otherworldly beauty. In addition, located in the town are the Siminublan Waterfalls, Amburayan River, and Maggew Burial Cave. Tourists may also visit the Municipal Tree Park or Santol Pavillion and indulge on local fruits like rambutan, lanzones, mango, watermelon and santol, the fruit from where the municipality was named after.

Santol is also known for its local dish, binagkal, a rice cake which is customarily served during occasions, specially on the Binagkal Festival celebrated every February. The town celebrates its Patronal Fiesta every December 19. March 22 – 25 also marks the date of the celebration Santol’s Ragragsakan and Panagbunga Festival, the annual town fiesta.