Rosario used to be a sitio and then a barrio of Santo Tomas, La Union. It was converted into a municipality in 1869.

The earliest people of Rosario were immigrants from Sto. Tomas, La Union and Magsingal, Ilocos Sur. Later, more immigrants arrived from the towns of Agoo, Tubao, Aringay and still later from San Fernando and Bacnotan.

As more immigrants arrived which resulted to the increase of its population, the people agreed it was about time that Rosario be converted into a town.

Don Mariano Posadas along with Don Mariano Narcelles and Don Gavino Ordoña, who had the best command spoken and written Spanish at that time, petitioned with the national and provincial authorities for barrio Rosario to become a regular municipality.

In 1869, the Spanish Provincial Governor granted their petition and appointed Don Agustin Isidro de Guzman as its first Captain Municipal.

There are two stories on how Rosario got its name.

In the early days, there were dense forests not only on the hills but also on the narrow valleys. Within these forests were many wild animals and birds. The rivers and brooks were deep and full of all kinds of fishes.

The banks of the Malitnaw and the Nilanguyan rivers and the numerous brooks were covered with different kinds of ferns and wild roses. The stem was long, clinging and was covered with sharp thorns. Against a broad and almost continuous background of green foliage, the wild roses looked like a huge white, red and pink ribbon meandering on the banks.

The Spanish soldiers who came to the place admired the beautiful landscape with dense forest and riverscape of “rosas del rio”. It was not very long however, when the inhabitants found it easier and more convenient to join the words thus, the name “ROSARIO”.

Another story is about the long range of foothill far west of the Poblacion. At a distance, it looked like big rosary beads cut in middle and laid down straight from end to end. Many people say that the name of the town was derived from this giant and long rocky rosary looking at the sky with a huge blank stare.

Rosario is the last town on the southern portion of La Union. From the south, it is the first town in the Ilocos region. Travelers aptly call it the “Gateway to Ilocandia” and since the national highway cuts through a mountain at barrio Agat, Sison, Pangasinan before it gently glides into the Bued bridge that marks the boundary between La Union and Pangasinan. A visitor who comes into the heartland of Ilocandia for the first time will have a memorable impression of a typical Ilocos topography-hilly, narrow plains and valleys, shallow rivers and brooks. 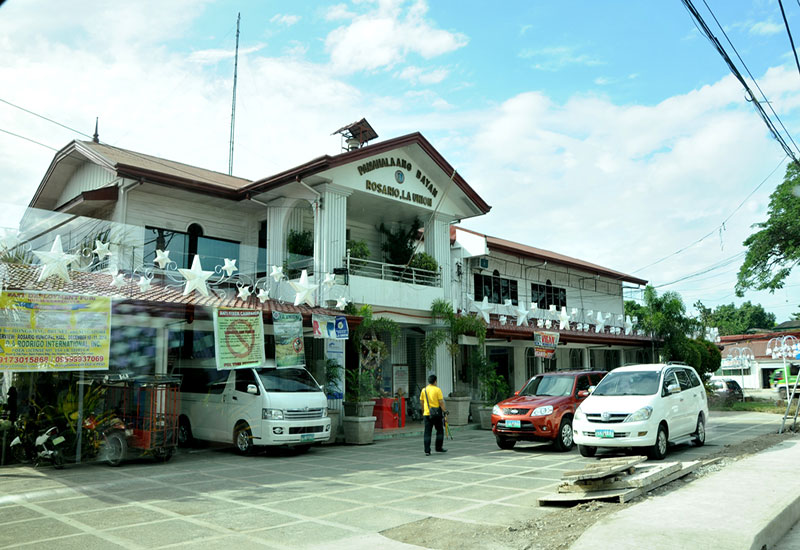 Around 216 kilometers away from Manila, Rosario requires a four-hour drive and serves as a link to the Ilocos and Cordillera Provinces. Kennon Road starts from this town and ends at Baguio City. It is also passed by motorists coming from Baguio City going to Western Pangasinan and Zambales Province. The town shall serve as the terminus of the Tarlac-Pangasinan-La Union Expressway.

Its beach resorts, zoo and other attractions such as the Queen of Peace Priory, Tree House, and World War II Vintage Canons located at the Town Plaza are the most visited by tourists. The Rosario Nature Park, a multi-hectare haven of lush green is La Union’s biggest camping site. Because of its wide area and excellent vegetation, it is used by the Boys Scouts and Girls Scouts of the Philippines as a venue for Jamborees. Air Soft Enthusiasts also utilize the area for their War Games.

From April 17 to 19, an Agri Trade Fair is held to showcase harvests of the Municipality. It is within these dates that the Linubian Festival is held which is named after a local cassava and banana cake. A street-dancing competition highlights the event. Predominantly Roman Catholic, Rosario’s Parochial Fiesta, the Feast of Immaculate Concepcion, falls every December 8.