The Town of Luna was formerly called Namacpacan. “Namacpacan” is an ilocano word which means “one who had given food.”

Based on early records, Namacpacan was a visita (a settlement with a church but is visited by non-resident clergies whose headquarters are at the cabecera) of Purao, now Balaoan, as early as 1587. It was a settlement along the camino real (national road) from Vigan to Manila and travelers stopped and refresh themselves at that place. The era of restaurants was not yet introduced during that time, and so the families of that town offered the travelers food and shelter, hence, the name of the place.

The settlement grew and on November 25, 1690, Namacpacan was founded as a town and parish with St. Catherine of Alexandria, virgin and martyr, as patroness. Since then, the town and patronal fiesta have always been celebrated every November 25. The original site of the town was in Darigayos, as settlement with a small cove which served as a harbor for sea-going vessels. In 1741, the parish was transferred to the place where it is now.

The town of Luna has become a by-word especially among catholic devotees because of the several miracles that are attributed to our Lady of Namacpacan. Our lady of Namacpacan is a beautiful image of the Blessed Virgin Mary. It was in 1871 when a galleon that came all the way from Mexico to deliver a statue of the Blessed Virgin to the Immaculate Concepcion Seminary in Vigan, Ilocos sur, stopped by Darigayos to seek cover from the stormy weather. According to traditional accounts, when the storm, is over, the galleon could not proceed to its destination because the sea became rough and unnavigable whenever the crew launched the vessel. They decided to bring the statue to Vigan by land. While making preparations, the statue was brought to the convent. The church at that time was undergoing repairs on the damaged portions brought about by a strong earthquake.

The following morning, before heading to Vigan, the men could not move the statue from the place where it stood. Fray Camilo Naves, an Augustinian priest, interpreted this as a message that the Blessed Virgin wanted her statue to remain in the parish. Negotiations were made with Church authorities who ordered the statue from Spain. It was agreed that the Catholics from Namacpacan would reimburse all expenses incurred and the parishioners contributed joyously and generously to the extent of selling portions of their fields to raise the amounts. An altar at the northern portion side of the church was constructed to house the statue of the Blessed Virgin Mary, Our Lady of Namacpacan.

On October 18, 1906, during the incumbency of Governor Joaquin Luna and Namacpacan Mayor Primitivo Resurreccion Novicio, the name of the town was changed to Namacpacan to Luna by virtue of Philippine Commission Act No. 1543. It was the first town that altered its name since the creation of the province in 1850. The change was based on the request of the municipal council which was subsequently approved and endorsed by the Provincial Board of La Union, in honor of the famous Luna brothers: Antonio, the General and Juan, the Painter, whose mother Doña Laureana Novicio Luna, was a native of the locality.

During the Liberation period or the latter part of the Japanese occupation, the general headquarters of the United States Armed Forces in the Philippines, Northern Luzon (USAFIP-NL) was transferred from Alibangsay, Bagulin to Daringayos. Here, a military camp named after American solider Private Grafton Spencer was established. At Camp Spencer, the USAFIP-NL planned their operations and mapped out strategies for the capture of General Yamashita. It was also at Camp Spencer where Yamashita was held prisoner before he was executed at the Los Baños Prisoner of War Camp.

Darigayos was likewise the landing site of the United States Navy submarine named “GAR” that unloaded 25 tons of ammunition, arms, communication equipment and supplies for the USAFIP-NL. This rendezvous, only seven kilometers from the nearest Japanese garrison in Balaoan, was coordinated and supervised by Major Parker Calvert of the USAFIP-NL in cooperation with the Filipino-American forces and the townspeople of Luna.

At present, the main occupation of the people is agricultural farming. Rise is planted twice or thrice a year in some areas. In between cropping, people plant vegetables and root crops. Next to farming, fishing is the most important occupation of the residents of Luna especially the inhabitants along the coastal areas. Various kinds of fishes and different species of edible sea weed and sea shells abound in the seawater of Luna.

Luna is also known for its stone-picking industry which is the main source of income of 14 of its barangays. These stones have found market not only in the country but also overseas.

Luna is also home to the famous Ilocano delicacies bibingka and tupig. Damili products (clay products) of various kinds are also made in barangay Barrientos. 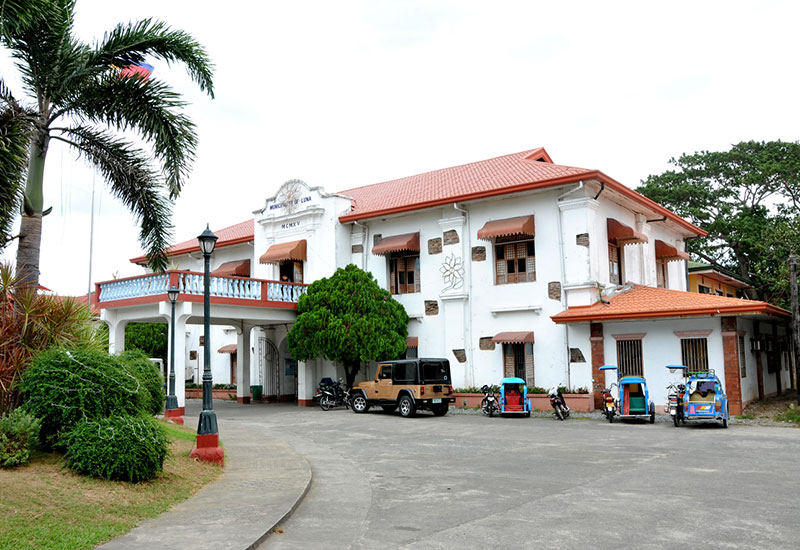 Approximately 297 kilometers away from Manila which corresponds to a six and a half hour driving, this coastal town can be reached via the Bacnotan-Luna-Balaoan Provincial Road. Jeepneys located near the San Fernando City Public Market serve commuters as early as six in the morning until seven in the evening. Travelers who are riding buses plying the Manila-Ilocos Route can get off at Balaoan Town Crossing and take tricycles which ply 24 hours a day bound for Luna.

For souvenir items, visitors can pick colorful pebbles of different sizes and shapes of their choice along the beach where the Baluarte Tower stands after more than three centuries. Serving as observation post during the Spanish Era against marauding Moro, Chinese and Japanese Pirates, the splitting tower has become a favorite subject of photographers. Visitors can also buy religious items beside the Saint Catherine of Alexandria Church where Our Lady of Namacpacan is enshrined. Visitors can also draw water coming from a well at the side of the church which is believed to be miraculous. A visit to this charming town can never be complete without a taste of its local Bibingka, generously served with egg and cheese.

Built in 1915, its Municipal Hall was recently improved and restored to maintain its antique stature. Its grounds also underwent landscaping and massive lighting to jive with the Spanish-inspired Architecture of Luna.

The town’s original name is Namacpacan, an Iloco word which means “one who had given food” due to the generosity of the locals of sharing their food to travelers going north during the Spanish times. On October 18, 1906, during the incumbency of Gov. Joaquin Luna and Namacpacan Mayor Primitivo Resurreccion Novicio, the name of the town was changed to Luna by virtue of Philippine Commission Act No. 1543. The change was based on the request of the Municipal Council which was subsequently approved and endorsed by the Provincial Board of La Union, in honor of Doña Laureana Novicio Luna, a native of the locality and mother of the famous Luna brothers, Antonio the General and Juan the Painter.