Burgos is the easternmost town of the province of La Union, named after the late martyr Father Jose Burgos, who, while fleeing from the Spaniards, made a stop-over and officiated mass at barrio Agpay.

The town of Burgos was once a part of Barrio Disdis of Sablan, Benguet. Due to the numerous creek and two big rivers that crossed along the barrio, it was also called “Baresbes,” meaning swampy. The rivers and the swamps made the place a natural home for all sorts of inland fishes. During the Spanish period, the northwestern part of the area was called “Rancheria Disdis” and the southern part “Rancheria Galiano”.

It is believed that the early settlers of the place were the Ibalois (Mangatibekbek) and Kankanaeys (Mangalkali) of Atok and Kapangan, Benguet and Pongpong of Tiw-angan, Bagulin, La Union. They were later joined by their brother Ilocanos from Vigan and Candon Ilocos Sur; San Fernando, Sto. Tomas, Aringay and Naguilian, La Union.

On March 5, 1903, the Philippine Commission passed Act No.662 which changed the geographical profile of La Union vis-à-vis its neighboring province, Benguet. Rancheria Galiano was givenn to Benguet and Rancheria Disdis to La Union. During the latter part of 1903, Rancheria Disdis was created into a municipal district of La Union.

In 1909, another boundary line between La Union and Benguet was drawn up. The Disdis Municipal District of La Union was annexed to Sablan, Benguet.

In 1920, the boundary line between La Union and Benguet was modified which reverted the municipal district of Disdis to the Province of La Union.

By virtue of Executive Order No. 54 dated November 27, 1925, the Municipal District of Burgos under the province of La Union was created. Formerly called Disdis Municipal District , it had the following barrios: Pappa, Bilis Northwest, Ribsuan, Libtong Norte and Bayabas West. The seat of government was found in Ribsuan and a municipal hall made of bamboo was constructed by the people. The order took effect on January 1, 1926.

In the 1930’s more barrios were created in the Burgos Municipal District, namely: Cauayan, Tumapoc, Linuan, Delles and Central. When Barrio Ribsuan was annexed to the municipality of Naguilian, the seat of government was moved to Central.

During the latter part of 1960, the seat of government was transferred from Central (now Old Poblacion) to its present site, New Poblacion. More barrios were created, namely: Agpay, Dalacdac (from barrio Cauayan), Imelda (from Libtong), New Poblacion (from Bilis), and Upper Tumapoc (from Tumapoc now called Lower Tumapoc).

It was only in 1960 when the municipal district of Burgos was converted into a regular municipality.

Burgos is one of the towns in the Province which are mass producers of Tigergrass. Pineapple, banana and other tropical fruits are abundantly produced in this municipality aside from root crops because of its mountainous terrains.

One of the local attractions in Burgos is the Libtong Lake located 3 kilometers from the town proper. The lake has an area of 1 hectare where fresh water fishes abound plentifully. The lake does not dry up during summer nor overflow during the rainy season. 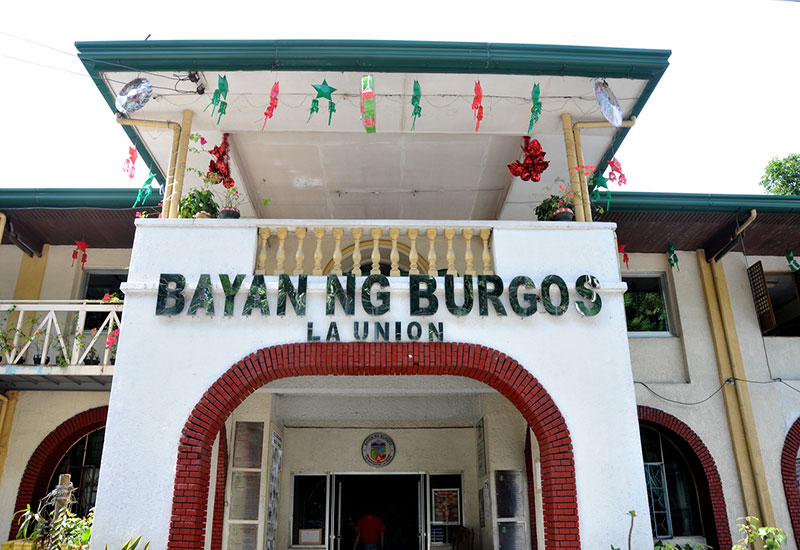 Located midway between San Fernando City and Baguio City, Burgos is an hour away from both the brilliant beaches of La Union and the pine forests of the Cordilleras. While it is mainly a transit destination, Burgos has wonders of its own such as the Bolikewkew Rice Terraces, Imelda Lake, and Dalacdac Dam. Travelers will find hiking among Burgos’ lush foliage a refreshing one, as the town has the coolest climate in the province.

Tapey (rice wine), binudbudan (a native delicacy), pineapples, bananas, and other fruits are the main offerings in the town’s market. Also on display are bamboo and basket handicrafts. Undoubtedly, the best souvenir to take home is Burgos’ famed colored soft brooms. Colorful arrays of these can easily be spotted on stalls along the Baguio-Bauang Highway where one can witness soft broom making demonstrations. The town’s plain and colored brooms are widely sold in Baguio and even Metro Manila. To rectify the misconception among buyers that the brooms are exclusively made in Baguio, all makers have been required to mark their products with the name of Burgos. The brooms’ prominence in the town’s livelihood is further illustrated during the annual Boyboy Festival held every February 21-23.

Burgos was named in honor of the martyr Father Jose Burgos who, while fleeing from the Spaniards, stopped by to officiate a mass in Sitio Domingo, Barangay Agpay.