Aringay, then a part of Pangasinan, was created as a municipality in 1741 under the jurisdiction of the Province of Pangasinan and the Bishopric of Nueva Segovia. Don Pablo Vergara was the first Gobernadorcillo. Aringay became a part of the province of La Union when the latter was founded in 1850.

When the Philippine Commission reorganized the administrative and territorial set-up of municipalities in 1903, the towns of Aringay and Caba were integrated into one municipality. Aringay was the seat of government until Caba was separated in 1907.

The early settlers of Aringay came from Ilocos Sur and Ilocos Norte. They were fishermen who made their settlements along the sea near the mouth of Aringay River (formerly Carayan Lucsin). These people divided themselves into two settlements, one on the north bank and the other on the south. These two groups extended their settlements eastward until the valleys behind the hills grew into flourishing villages.

The episode states that one moonless night, the lovers secretly met at Carayan Lucsin to discuss their elopement because their respective parents were against their relationship. The girl, anticipating that their relationship would not prosper to marriage, wanted to end her life and jumped into the river. But the young man was quick to the rescue and shouted “ARING, ay” “ARING, ay!” and dived into the river to save his beloved.

The young man’s voice reverberated and broke the silence of the night and people from both settlements rushed to the river bank and saw the young man rescuing the girl from drowning in the open sea. These people dived to extend help to the two young lovers.

Because of this tragic incident, both parents of the young lovers agreed for the union of their children. This union paved the way into the friendship of the two settlements, thus forming the village called ARINGAY. The couple happily lived thereafter and the young man was bestowed the privilege to rule the two settlements.

Today, Aringay boasts a wide hectarage of milkfish, prawn and oyster culture in barangays Alaska, Dulao, Samara and Sto. Tomas. The eastern part of the town is mountainous with some fertile valleys cultivated with rice, tobacco, vegetable and other root crops. Irrigation system has also benefited farmers in some areas to plant twice or thrice a year.

One of its historical landmarks is the 500-meter tunnel where people sought refuge during the American regime located in Barangay Salapak, Poblacion. It was endorsed to the Department of Tourism for its restoration to become the gateway of the proposed Aringay-Baguio Road. 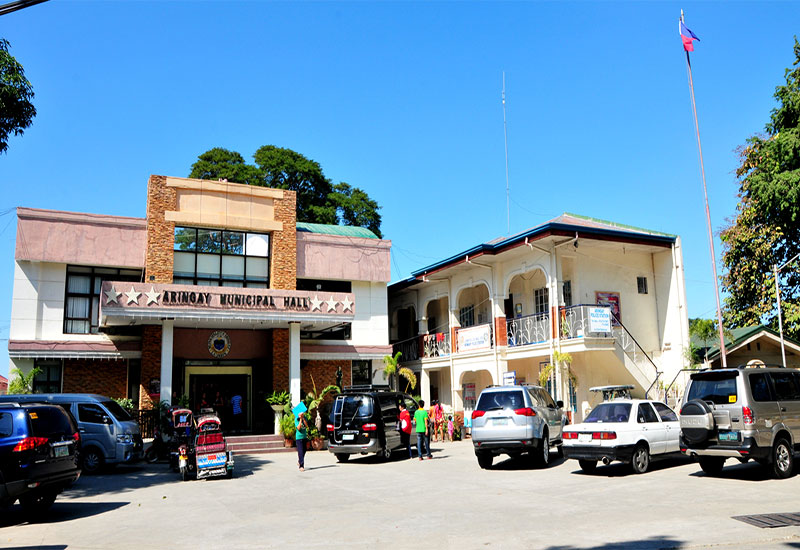 The Municipality of Aringay is located along the national highway, north of Agoo and south of Caba. Approximately 244 kilometers from Manila, it requires about five hours of driving to reach this thriving municipality. It also has tricycles stationed in front of the Public Market which are ready any time of the day to serve visitors especially for those going to the coastal barangays where most of the resorts are located.

The 500 meter La Union Centennial Tunnel also known as Sallapak Tunnel is located within the municipality. Intended for trains of the Philippine National Railways (PNR) bound for Baguio City, it was later abandoned by the Commonwealth Government because of the then impending Second World War. According to locals, the tunnel already exists during the Spanish era, it was only in the American occupation that it was developed and fortified, thus making it officially more than a century year old. During the Japanese occupation, the tunnel was used as headquarters of the Japanese Imperial Army because of its durability against US bombings, rising speculations that hidden treasures were buried in the area.

Popular for its Bangus Industry, the municipality also serves as home for the Philippine National Police Regional Training Center. Aringay is also the hometown of the country’s first Ms. Universe, Ms. Gloria Diaz.

Aringay celebrates its Town Fiesta from December 1 to 13 as well as its Parochial Fiesta, the Feast of Saint Lucy, every 4th of May.