The dream and aspiration of the people of Bacnotan to have their own hospital was realized when the Bacnotan Emergency Hospital was inaugurated when September 16, 1975. It was spearheaded by then Gov. Juvenal K. Guerrero, who hails from the place and organized by Dr. Juan Mabutas Jr., then Chief of Hospital of the La Union Provincial Hospital and with the leadership of the late Mayor Francisco Fontanilla. It was temporarily housed in a Prefab Marcos Building, located beside the Municipal Hall of Bacnotan, with ten (10) original staff.

The hospital kept abreast with progress when after two (2) years of service, a 2.7 hectares Riceland at the Barangay Bulala and Barangay Poblacion, Bacnotan, La union was donated for the construction of a new Two (2) storey building under the leadership of the late Mayor Zosimo Cargamento, though it was only half of the planned main building of the hospital.

The Bacnotan District Hospital has now 129 personnel including casual, contractuals and job orders.

In 2006, the La Union Integrated Public Health and Hospital Development were fully implemented with an objective of establishing self-reliant and self-sustaining health delivery based on community participation. And with the full implementation of being an Economic Enterprise, BDH has constructed improvements of the hospital main building, purchased new and modern equipment, hired Medical Specialists and have augmented the manpower of the hospital to give the best health care delivery and to reduce the impact of worldwide economic crisis.

BDH now performs minor and major operations already and more complicated cases are being treated in as much as it has physicians with specialty trainings in Surgery, Pediatrics, Internal Medicine and OB-Gyne equipped with new and modern equipment.

There is a tremendous increase in the cost of recovery program with a surplus income of 3.9M for CY 2008. The Cash/ Retail Pharmacy have greatly improved our drugs and medicines need of the hospital. It has supplemented and augmented regular pharmacy.

In summary, the good hospital accomplishment is a reflection of the support and the inspiration made by the Provincial Government to work as a team.

Bacnotan District Hospital as a Center of H.O.P.E and Service with a Smile; Nephrology Center by 2022

To make Bacnotan District Hospital a center of health care that provides an affordable and quality medical and health-related services to the community especially to the underprivileged; and an advocate of renal care towards a “Healthy La Union: Happy La Union by 2022”

The dream and aspirations of the people of Bacnotan to have a hospital of their own was realized when Bacnotan Emergency Hospital was inaugurated on September 16, 1975, spearheaded by then late Gov. Juvenal K. Guerrero and Dr. Juan Mabutas Jr., then Chief of the La Union Provincial Hospital primarily to provide an improved comprehensive health care to the people of Bacnotan and neighboring towns especially the indigents. In 2005, Resolution No. 038-2005 approving the La Union Integrated Public Health and Hospital Service Development Plan for CY 2004-2008 was implemented where one (1) component was the transformation of all district hospitals into Economic Enterprise with the objective of establishing a self-reliant and self-sustaining health delivery based on community participation. 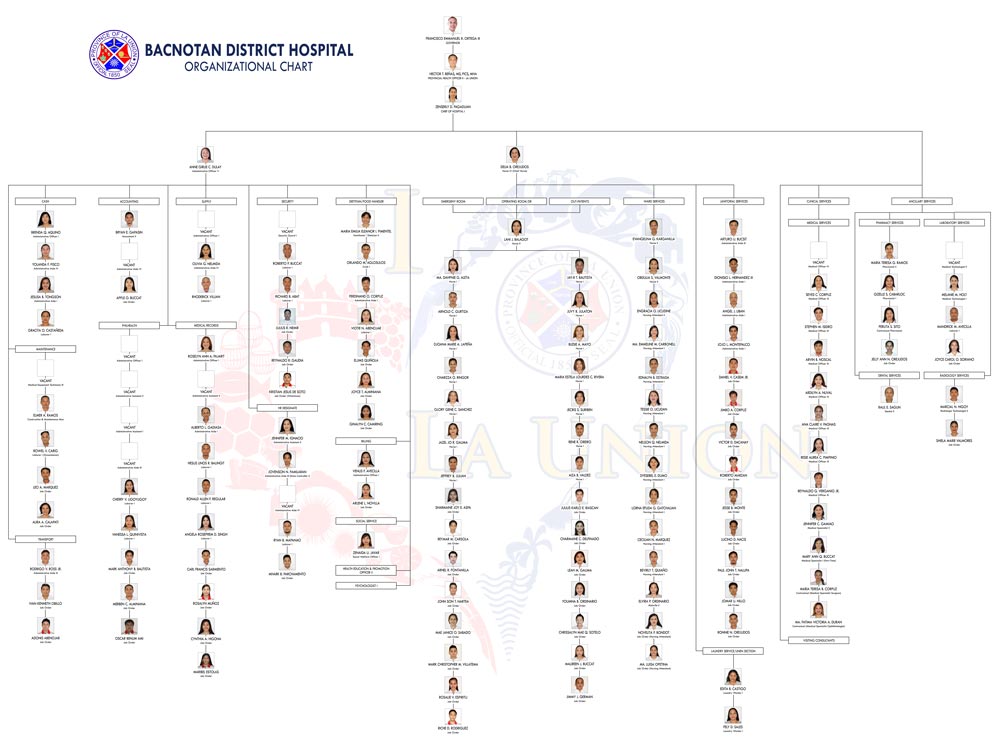