The City of San Fernando is the first city created in the province of La Union by virtue of Republic Act 8509, sponsored by the Congressman Victor F. Ortega in the House of Representatives, signed by President Fidel V. Ramos on February 13, 1998 and was ratified by a plebiscite on March 20, 1998.

The City of San Fernando is situated in the mountainous area at almost the mid-section of La Union along the China Sea. It was founded in 1786 and made the “cabecera” or provincial capital on the same day that La Union became province in 1850.

During the Spanish times, a settlement was a place where there were about 200 families. Around this area, there were two settlements, San Vicente de Balanac and San Guillermo de Dalangdang, San Vicente de Balanac was along the coast and during summer, when the sea was calm and perfect for sailing, pirates would come and plunder the settlement, taking along with them the women and children leaving behind them a trail of blood. San Guillermo de Dalangdang, however, was at the foothills of the Cordillera mountains, and during summer, when the fire trees were in bloom, the populace was attacked by headhunters who saw in the red flowers of fire trees, a sign of the gods asking for human offerings.

In 1759, an Augustinian priest, Father Jose Torres, convinced the two settlements to come together to a place not so near the sea and not so near the mountains so they will not be plagued by their annual problems. They chose the area called Pindangan, meaning, a place where they dry fish and in this place, they built in a church with San Guillermo the Hermit as the patron saint. In 1765, the newly assigned priest, however, suggested to the inhabitants that they change the name of Pindangan to San Fernando, after the Catholic King of Spain, retaining San Guillermo as their patron saint. The name of the parish priest was Father Fernando Rey, Rey being the Spanish word for King. This was also the time of Diego Silang, and as we know, Silang would travel to and from Manila on his white horse and was killed on May 28, 1763. When an earthquake destroyed the church at Pindangan, renamed San Fernando, the parish priest decided not to rebuild in the same place because during the rainy season, the church was transferred until it found its present place, and it is now called the Cathedral of St. William the Hermit, of the Diocese of San Fernando, La Union.

On May 1786, the Ministerio de San Fernando was established. However, due to lack of priests during the period 1792 to 1831, San Fernando became a “visita” of Bauang and San Juan. In 1831, Father Juan Sorolla, the parish priest of Bauang in 1829, was assigned in San Fernando.

According to historical records, the construction of the present church started in 1817 by Father Simon Torrado with Father Sorolla as its first parish priest.

San Fernando has grown slowly from the time it was founded. This slow growth maybe attributed to the fact that travels during those days was long and tedious. Sectionalism was rampant because education was not widely diffused. Intermingling of the people was limited to neighboring towns. Only the well-to-do and the powerful obtained their education and this too, was limited as it was then the policy of the Spaniards to deny education to the masses. In spite of this backward policy, the people improved economically, educationally and spiritually. An offshoot of this improvement was the revolt of the people against the Spaniards which assumed in greater proportions when the Spaniards became abusive. Although the people were subservient to the ruling power, there were fateful prohibitions that cut deep into the private life of the people which found outlet in the form of uprisings and occasional revolts to give vent to their pent-up emotions. The climax came in 1896 when the country was swept by a widespread revolt. In 1898, the Spanish garrison in San Fernando was attacked by Filipino insurgents under the leadership of General Manuel Tinio and Mauro Ortiz. In the end, the Filipinos prevailed over the Spaniards.

Then the Americans came. Spain fell in ruins, victims of her own greed and ambition. San Fernando experienced naval bombardment of the Americans as well as actual fighting on land when General Gregorio del Pilar commanded the rearguard of General Emilio Aguinaldo to cover the latter’s retreat. In a short while, Aguinaldo and his officers and soldiers were captured by the Americans. Peace and order were restored. A democratic form of government took the place of that once proud despotic government of Spain. The people of San Fernando took advantage of all the Americans could teach - politically and economically. San Fernando progressed with the rest of the towns in the province.

In 1941, the Japanese came. Japanese planes bombed San Fernando. The guerillas of the 21st Infantry became active and engaged a do-or-die battle against the Japanese Imperial Forces. A bloody fighting took place in Barrio Bacsil until the town was liberated in 1945.

The destruction of property in San Fernando was appalling. Only few houses remained standing in what was once a thriving town of beautiful houses. Thus, from the nibbles of war, San Fernando rose until it became the administrative capital of Region I.

In May 14, 1996, the Sangguniang Bayan of San Fernando passed Resolution No. 20 requesting the House of Representatives, Congress of the Philippines for the conversion of the Municipality of San Fernando into a Component City. That time, the municipality of San Fernando had satisfactorily met the basic requirements for its conversion into cityhood pursuant to the provisions of the Local Government Code 1991. In a certification issued by the Bureau of Local Government Finance, the average annual income of San Fernando for calendar years 1994, and 1995 based on 1991 constant prices was P 44,351,821.66. Further, in a certification by the Land Management Bureau of the Department of Environment and Natural Resources, the land area of San Fernando is 10,526 hectares, well above the minimum requirement of 10,000 hectares.

The Sangguniang Panlalawigan of La Union, after a comprehensive study and judicious evaluation of the petition of the Sangguniang Bayan of San Fernando, adopted Resolution No. 425-96 endorsing its cityhood bid to the House of Representatives, Congress of the Philippines.

Upon the sponsorship of the Congressman Victor F. Ortega (1st District- La Union) at the House of Representatives, House Bill 7594 (Act Converting the Municipality of San Fernando, La Union into a Component City to be known as City of San Fernando) was approved.

The petition was likewise approved at the Upper House through the sponsorship of Senators Vicente Sotto III and Juan Flavier. On February 13, 1998, Republic Act 8509 was signed into law by President Fidel V. Ramos and finally on March 20, 1998, the residents of San Fernando manifested their resounding YES in the Plebiscite that ratified the said law, thus, the fulfillment of the dream for San Fernando to become a city.

Located some 8 kilometers from the city proper, on a forest mountain is nestled the La Union Botanical Garden – a green spot on the map that is probably the only one of its kind in the country. The 10 hectare garden located at Barngay Cadaclan is a display of varied species of living plants and a sanctuary of varieties of wild animals. Clean and green are the bywords of the garden which provide the visitors maximum satisfaction and a healthful promenade.

The City of San Fernando is now the seat of national government agencies in Region I and center of trade, commerce, financial and educational institutions, among others. From a deep rooted potential of stable community governance to the best gift of Mother Nature- a seaport community responsive to international shipping, an airport with viable capacity to accommodate international air traffic, natural terrain conducive to tourism development and a people endowed with cultural and virtuous heritage of industry, spirituality, nationalism and aspiration for growth, peace and prosperity, the City of San Fernando has emerged as the booming Metropolis of the North. 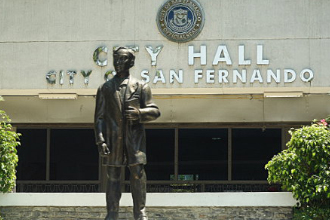 24-hour major transit point as well as origin-destination of buses plying the Manila-Laoag City route, San Fernando City is very accessible due to its strategic location. Commuters and motorists will find their visit relaxing, thanks to its excellent roads and bridges. Only 270 kilometers north of Metro Manila which translate to a five to six-hour drive by land, it hosts to majority of national government agencies as the Administrative Capital of Region I.

Visitors can comfortably explore the city, especially its tourist attractions like the Botanical Garden, La Union Science Centrum, Bacsil Ridge, Pindangan Ruins, Ma-Cho Temple, Heroes’ Hill, Tomb of the Unknown Soldier, Christ the Redeemer, Capitol Complex and Thunderbird Entertainment Complex, with its wide array of transportation facilities. Jeepneys ply the major commercial and industrial centers of the city as well as the far-flung barangays. Tricycles are also available 24 hours a day, ready to take you to your desired destination. The city plaza, other than the private bus terminals, serves as the main loading and unloading zone of most public utility vehicles.

From March 7 to March 20, the star-studded City Fiesta is celebrated. It is highlighted by the Feast of Saint William the Hermit which is celebrated every 10th of February and the Pageant Night of Ms. City of San Fernando which is held on the last day of the fiesta.

A visit to the city won’t be complete without a taste of the sumptuous local Halo-Halo, genuine Chinese Cuisine and Seafood Restaurants. Experience also the city’s nightlife with its wide choice of bars, folk houses and videoke houses.

Guests who are always on the go can grab a souvenir at the La Union Trade Center which is aptly located along the National Highway beside the City Hall. SEAIR also flies from Manila to San Fernando City and vise-versa every Monday, Wednesday and Friday. For those who wish to extend their stay, the city offers a wide array of hotels and motels suited for their budget.