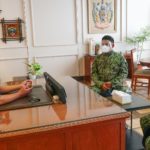 SUSTAINING STRONG TIES WITH CITY PNP. In a courtesy visit to Gov. Pacoy on May 11, 2021, outgoing City of San Fernando Chief of Police (COP) PLTCOL Orly Z. Pagaduan expressed his gratitude in the collaborative effort of the Provincial Government of La Union (PGLU) and the Philippine National Police (PNP) – City of San Fernando in sustaining peace and order during his term while incoming COP PMAJ Benjie Daireu Umalla have committed to provide trustworthy service to constituents.
Gov. Pacoy also thanked PLTCOL Pagaduan for his service in the City PNP amidst the CoViD-19 pandemic. Reassuring his full support, he congratulated PMAJ Umalla as he handed both officers their tokens of gratitude from the Province of La Union.
To ensure peace and order in the whole province, the PGLU continues its collaborative work with the City Government of San Fernando and all municipalities of La Union. 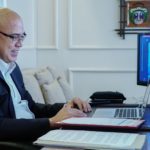 In the continuous promotion of the Provincial Government of La Union campaign #KalikasanNaman, Gov. Francisco Emmanuel “Pacoy” R. Ortega III participated in the virtual presentation meeting of the Department of Environment and Natural Resources-Mines and Geosciences Bureau Region 1 of the result of their Geologic Study on Pebble Picking Areas in Luna, La Union on May 10, 2021. 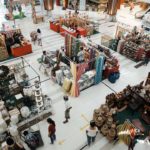 In its continuous effort to facilitate crisis recovery, the Provincial Government of La Union extends support to La Union Entrepreneurs for Progress Association, Inc. (LUEPA) as it opens today, May 7, 2021 the Buena Mano by LUEPA Bazaar at CSI The City Mall, City of San Fernando, La Union which will run until May 23, 2021. 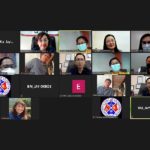 With the aim to bolster economic activities and attract investors amidst the pandemic, the Provincial Government of La Union (PGLU) along with the Department of Trade and Industry – La Union (DTI-LU) is extending technical assistance to component Local Government Units (LGUs) to update their Local Investment and Incentives Code (LIIC).
As the La Union Investment and Incentives Board (LUIIB) secretariat, the Local Economic Enterprise and Investment Promotions Unit (LEEIPU) headed by Ms. Charito C. Dator assisted in the creation of a Technical Working Group (TWG) to guide in updating their LIIC during their monthly meeting held on May 7, 2021 via video conferencing.
The TWG, headed by DTI-LU Provincial Director, Merlie D. Membrere, will also assist the LGUs in crafting the Implementing Rules and Regulations of their LIIC.
The TWG aspires to align the LIICs with the recently signed Corporate Recovery and Tax Incentives for Enterprises Act, producing more competitive incentives and attracting investors to make the Province of La Union a preferred investment area.
The La Union Investment and Incentives Board Meeting was presided by Vice Chairperson Lina Flor G. Hizon. Also present were other board members: Sangguniang Panlalawigan Member Jonathan Justo A. Orros; Engr. Cherish Rillera-Caasi representing Mayor Stefanie Ann Eriguel; Mr. Cesar Ocampo; Mr. Ronald Dy; and Dr. Catherine Bada representing Atty. Felix S. Racadio. Guests from the PGLU who served as resource persons in their field of expertise were Provincial Legal Officer Atty. Dominique Jose S. Puzon; Atty. Marion Guerrero; and Acting Provincial Treasurer Janet Molina. 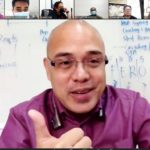 Gov. Francisco Emmanuel “Pacoy” R. Ortega III highlights the importance of efficient data management in the province’s fight against the CoViD-19 Pandemic as the members of the Provincial Core Team Against COVID-19 (PCTAC) reported updates during their virtual meeting on May 6, 2021.

As of May 5, 2021, out of the 353 isolation beds of the hospitals in the province, 49% is currently occupied. While there are 154 admissions in the Local CoViD-19 Centers (LCCs) with 37 LSIs, 6 close contacts, 9 suspects and 102 confirmed positive cases. The LCCs have 26.23% occupancy rate, the Provincial Government of La Union (PGLU) Home of Hope in Sevilla, City of San Fernando has 41.67 occupancy rate while the PGLU Home of Hope in Acao, Bauang has no admission at present and is undergoing extensive disinfection.

Gov. Pacoy explained that accurate data gathering will aid the PGLU in managing its resources in a more efficient manner.

One of the notable points in the meeting showed that there is still a room for improvement in terms of contact tracing wherein the proposed gap solution is to tap some of the 60 project-based nurses (PBN) of PLGU and DepEd nurses to serve as contact tracers.

The PGLU is targeting to assign two PBNs in each municipality and four PBNs in the City of San Fernando. Four PBNs were also assigned to each CoViD-19 Facility – District Hospitals and six for the La Union Medical Center.

The Daily Attack Rate of the province is at 2.72 new cases per 100,000 population while the two-week growth rate is at -76.33% indicating that La Union is at low epidemic risk level or Modified General Community Quarantine.

In terms of the CoViD-19 vaccination in the province, 62.76% of the total eligible population group A1 have already been immunized while 4.29% of the eligible population under A2, La Union being the only province in Region 1 that has started with the priority group A2.

“Public service is about trust…I appreciate the work of everyone and I am just here if you need me,” said Gov. Pacoy in his message. 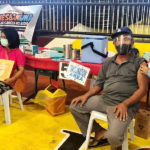 With the continuing #BakunaMuna Program of La Union, the vaccination team of the Municipality of San Juan with the assistance of two vaccination teams of the Provincial Government of La Union (PGLU) inoculated a total of 284 vaccinees, the highest number of vaccinated individuals so far in the province in a day on a single site during the CoViD-19 vaccination of Senior Citizens or Priority Group A2 in the said town on May 5, 2021. 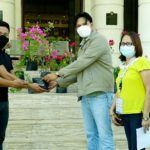 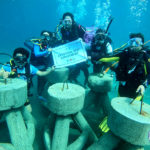 In its bid to promote ecological integrity and clean and healthy environment through the La Union #KalikasanNaman campaign, the Provincial Government of La Union (PGLU) SCUBA Diving Team assisted in the successful deployment of 70 units of Artificial Reef (AR) on April 22 to 28, 2021 in the coastal Municipalities of Balaoan, Bacnotan and San Juan, La Union .